by Reg. A. Watson

On the 3rd September this year it is the 120th anniversary of the Australian National Flag, which dates from 1901. It was on that day Prime Minister Edmund 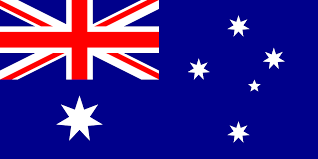 Barton announced the winners of a competition who had designed a flag for Australia. A large flag, 5.5 metres by 11 metres, was then flown over the dome of the Exhibition Building, Melbourne. At that time the flag was known as the Commonwealth blue ensign; later, the flag became known as the Australian National Flag. It was not until 1953 with the passing of the Flag Act that it was proclaimed definitively the Australian Blue Ensign as the National Flag and the Red Ensign as the proper colours for merchant ships registered in Australia.

The origin of the Australian National Flag is more than interesting, because our flag was chosen as a result of a nation-wide competition.  Indeed, as far as I am aware, Australia is the only country where this has happened. One per cent of the entire population of Australia responded with an entry.  Therefore it was the PEOPLE who originated our flag, which is a wonderful achievement and we should be proud of that

Those who judged the flag entries did so with the guidelines in mind of history, heraldry, distinctiveness, utility and the cost of manufacture.  It was Lady Hopetoun, wife of the Governor-General, who opened a display of the entries in the competition. Sir Edmund Barton announced that five entrants, who had submitted similar designs, were to share the honour of being declared the designers of Australian National Flag.

It is important to know that the designers were given a free rein on ideas, so there was no cohesion or any enforcement of what was expected.

It is said one of the winners of the competition, Ivor William Evans, who lived in Melbourne that his father may have influenced his son’s design. Mr Evans senior was aware of the Australasian League Flag, the symbol of the anti-transportation movement of colonial times and which is held in that city.  The flag is very comparable to the national flag and preceded it.

Ivor was 14 years old when he submitted his entry.  But what was his motive?  Was it because his father suggested it to be similar to the historic one in Launceston? There is no record of this; rather Ivor believed that the flag of the United Kingdom, Great Britain had a place on Australia’s flag because of the historical links between our island continent and the British Isles. Ivor believed that it had an “Honourable place” on the Australian flag and he recognised this fact – a new nation paying respect to its origins. Ivor made a flag that he filled with symbols of his hope for the nation’s future.

If we project ourselves back a hundred and twenty years at the time of federation, pride in the new nation was strong and we had adopted our own national Constitution.

The Southern Cross as displayed on our flag has great meaning. It tells the world geographically where we are situated and it also shows whereas we have a British heritage we are different and we are a separate nation to the Mother Land. Another reason for Ivor’s choice of the Southern Cross was Dante’s poem when he wrote about four bright stars which symbolised the four moral virtues of justice, prudence, temperance and fortitude – principles that Australia should live up to.

We possess a beautiful flag which was displayed with great enthusiasm at the 2021 Tokyo Olympics.  Down through the 120 years it has been displayed through adversity (war and natural disasters) and national and personal successes. It was first flown after its origins in 1901. I have a photograph of it draping Harry (Breaker) Morant’s grave in South Africa during the Anglo-Boer War when he was executed on the 27th February 1902.

Here are some ideas to help celebrate Australian National Flag Day: Conduct a flag-raising ceremony. Business and organisations which don’t have a flagpole may wish to display the Australian National Flag in the public areas of their buildings, such as foyers. Fly from your own home.  Display from your car. We have a most beautiful and one of the most impressive and recognizable flags in the world. Every display should be befitting the national emblem. There is no restriction in flying the flag as stated by the then Prime Minister, Ben Chifley in a press statement of 1947. Let’s safeguard it and be proud of it.

Reg A. Watson is a Tasmanian author & historian.  He is also President of the Australian National Flag Association (Tas)